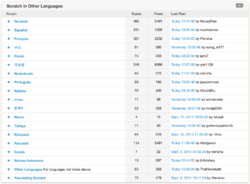 The Language Forums is a group of forums in the Scratch Forums where Scratchers can discuss Scratch in other languages and discuss the translation of the Scratch interface.

There are forums for the following languages:

In each, there is a stickied topic called [Language name] only forum, with the message

If a Scratcher wishes to discuss Scratch in a language that does not have its own forum, s/he can propose for the language to be made into its own forum in the Translating Scratch forums. Once a language gets enough support there, a forum will be made for it. In the meanwhile, a Scratcher may use the Other Languages forum to post in other languages.

Retrieved from "https://test.scratch-wiki.info/w/index.php?title=Eng:Language_Forums&oldid=7490"
Cookies help us deliver our services. By using our services, you agree to our use of cookies.
Category: