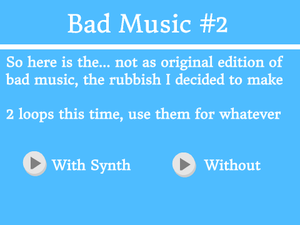 An image of a self-composed music project.

There are many different instruments that Scratchers choose to make a project on. They range from the piano to the drums to the trumpet. Sounds can be generated by the Scratch program, which allows the user to change the instrument. Currently, there are 21 different instrument timbres that can be used. Alternatively, for a more realistic sound, Scratchers can record themselves with the microphone in the Scratch program.

AMV stands for "Animated Music Video." These are animations that play music, and animate accordingly with somewhat relation to the lyrics and tune of the song played. They are very popular across the site and often reach the front page.

Recordings vary in style and genre: they can be vocal, instrumental, pop or classical.

Music from Games or Movies

Some projects recreate music from games or movies. This can be done by using sound blocks, or by using a recording or video. This type of music project is not to be confused with game projects that simply have music playing in the background.

Some projects play existing songs in reverse, often made for amusement and humor. This is made with the Sound Editor. 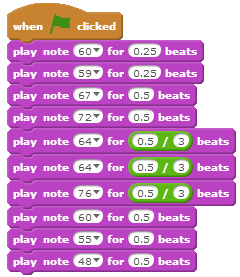 Chords can be created by playing two or more of these scripts at the same time!

Some Scratchers compose their own music and release it on Scratch. Music can be created in a digital program, or can even be a recording.

Some users prefer to make music in Scratch by taking advantage of its sound blocks. Users can build scripts with music blocks and have it play in sequence, or have two sets of these scripts play at the same time to create chords.

It has been reported that over 40,000+ URLs to music projects on Scratch have been requested for take-down[1], probably due to the use of copyrighted music. This has become viral and caused an outcry on the Scratch Community[2], similar to the notable events of Removed Pac-Man Project and Animation Hall of Fame.

Retrieved from "https://test.scratch-wiki.info/w/index.php?title=Eng:Music_Projects&oldid=7812"
Cookies help us deliver our services. By using our services, you agree to our use of cookies.
Category: