The Random Sprite button or Get Surprise Sprite button as it was sometimes called was a feature in Scratch 1.x that allowed a user to load a random sprite from Scratch's sprite folders, including user-made sprites. This was taken out of Scratch 2.0 for an unknown reason. If you have the 1.4 offline editor downloaded, you can still use it to make random sprites appear. 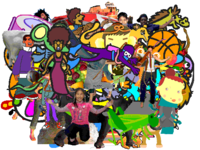 The result of the Random Sprite button being clicked many times.

Here are a few common uses for the button: