The following users are then invited to be curators of the studio:[1]

Scratch Team members also occasionally help the Scratch Design Studio, although most of them don't curate the studios.

The following were SDS curators at one point, but have opted out. 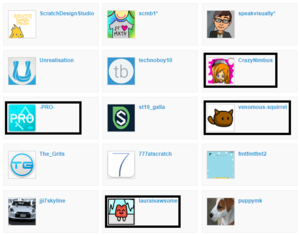 All Camp Counselors were curators of the Create with These Characters SDS.

There have been other SDS Curators that retired, but some of them are unknown since they didn't curate the studios until the update was added where people could curate studios.

In the Create with these Characters SDS, all CCC counselors were made curators.[2]

SDS Curators spend many hours with SDS related work. For instance, they add/review projects, they discuss SDS related things in the SDS Private Forum, and more. It isn't an easy job to have.

The main duty of an SDS curator is to add projects to the SDS. However, the SDS Curators also have to review the project first, to make sure it's suitable for the front page, and that it fits the requirements of the SDS. It's not uncommon for an SDS Curator to not add a project, but when they don't, they notify the creator of the project that the project was not added for whatever reason, and ask them to repost the link when fixed. When a project is added, they also notify the creator, telling the user that their project has been added. This is to avoid confusion among the user and other curators. Curators discuss specific projects they aren't sure about in the private SDS forum.

The SDS curators also choose future SDS themes with the Scratch Team. Some SDS studios are new and original ideas for themes, and some ideas picked were submitted as a project in the 'Propose SDS Themes Here!' studio.

When a theme has been officially chosen, it's the job of the SDS Curators to set up the new studio. The studio itself is made by the Scratch Team, but it's the role of the curators to get the description, thumbnail, title and seed projects. They often discuss their progress in the private SDS forum.

When new curators are required, it's the current SDS curators role to decide new curators. They discuss this in the private SDS forum. When they've decided on (a) new curator(s), they notify the Scratch Team, who gets in touch with the new curator(s).

The past Scratch Team member taranir made a project explaining how you could become an SDS curator. The current curators have recently updated the project with more information. It said:

Retrieved from "https://test.scratch-wiki.info/w/index.php?title=Tur:Scratch_Tasarım_Stüdyosu_Küratörü&oldid=19781"
Cookies help us deliver our services. By using our services, you agree to our use of cookies.
Categories: