Difference between revisions of "Zho:范例库"

范例库 are sections in 专案 editors were the user can select an example 角色 or background. In Scratch 1.4, some sprites included in the library had premade scripts. 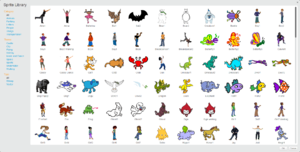 This library is used to get premade sprites, sometimes including multiple costumes, on projects. There are 329 sprites in the library.

The sprites library is sorted into the following themes. 城堡、城市、舞蹈、饰品、飞翔、节日、音乐、太空、运动、水中、步行。

Only the sprites and costumes library are sorted into types, which are the following. 全部、点阵图、向量图。 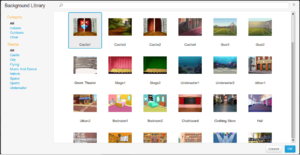 This library is used to get premade backdrops on projects. There are 96 backdrops in the library. 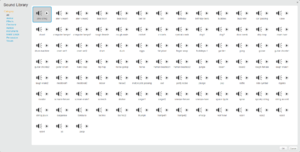 This library is used to get pre-made sounds on projects. Sounds can be previewed by clicking the play button to the right of the desired sound. There are 118 sounds in the library.

The sounds library is separated into the following categories. 动物、效果、电子、人类、乐器、音乐循环、音符、打击乐器、人声。 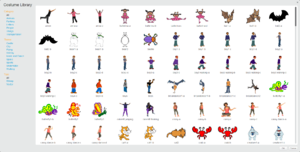 The extensions library is where all extensions are located. Extensions include PicoBoard and Lego WeDo.

Retrieved from "https://test.scratch-wiki.info/w/index.php?title=Zho:范例库&oldid=17331"
Cookies help us deliver our services. By using our services, you agree to our use of cookies.
Category: