The development of Scratch 1.0 was a lengthy process, with its beginnings in 2003 to the release of the final program and Scratch Website in January Scratch Timeline#2007. 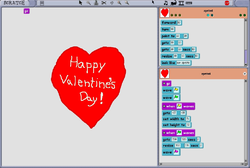 The idea for Scratch was first proposed to the NSF in early 2003[1] by Mitch Resnick (of Lifelong Kindergarten Group and Scratch Team fame) and John Maeda of MIT, as well as Yasmin Kafai of UCLA.[2] This proposal was accepted, and they were given a grant. Over the course of 2003, they worked on Scratch 0.1 before testing it in Computer and with MIT and Harvard students in the fall (specifically October for the latter).[3]

Pictured on the right is one such version of 0.1, featuring a very different layout than the final version. The project viewer was on the left whereas the scripts were on the right, which was later reversed (although the layout was changed back in Scratch 2.0). It also had none of the traditional menus or the Block Palette, and the Blockss were much more square-shaped.

The layout of a new project in 0.2

In 2004, the main body of the program was redesigned so that the Scripts Area and project player were now reversed, as well as to allow for a dedicated area for sprites. The menu bar was fleshed out a little, adding the precursor to the Green Flag. The version from March also included the introduction of the Stage, the ability to Procedures, and the first implementation of broadcasts.[4]

There are images available of two other known versions from this year, the chronology of which can only be estimated. The first, from around mid-2004, features different colors, new buttons, and simplified block names. The second, from sometime not long before 2005, adds more information about sprites as well as block names much closer to that of the released version. It also has another category of blocks, although it's unknown what this was or what it contained.

The February 14, 2004 build can be still downloaded here. (Windows/Mac)

In 2005, the layout of the Scratch program began to more closely resemble that of Scratch 1.0. Available images from the version in January 2005 reveal only a few differences, including a purple star button to make new sprites at the top and green Stage Monitor. In addition, there are a few blocks that were later removed, such as Change Stretch by () (block) and set visibility to () % // category=looks. This version was the first to be introduced to Computer Clubhouse programs.[5]

There is little information regarding versions of Scratch in the earlier half of 2006, and the first known version is one from June.[6] Later on, October and November betas were released onto the Scratch website. Those two versions introduced several blocks, including the following:

In addition, the Scratch Team introduced several features that remained part of the program until Scratch 1.4 or up to the present day, including the sprite creation buttons, importing and selection in the Paint Editor, toggleable stage monitors, and animated GIF importing. The November 2006 version of Scratch would prove to be the final version before the release of Scratch 1.0 in January 2007.