This article or section documents an outdated version of Scratch (version 1.4). For this article in Scratch 2.0, see Eng:Front Page (2.0). 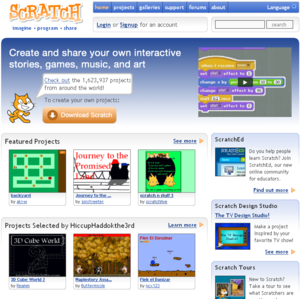 The top part of the Scratch Homepage, when not logged in.

The Front Page is a common term that refers to the Scratch Homepage, where many projects are shown in varied rows of three

In some cases a project is deemed inappropriate for the front page, and marked Not For Everyone.

Some projects are exempt from the top ten. These include projects that are featured or curated, or projects by a user who has another project on the front page. If a project is in the Top Loved, it will not be shown in Top Viewed. In these cases, the eleventh, twelfth, or lower ranked projects are added into the choices.

The sidebar was to the right of the rows. It highlighted other content on the front page besides for projects. The following items were usually in the sidebar:

News, such as Scratch Day or Collab Camp, are usually shown in the top slot.

These sections were removed during the renovation in early July 2009.

The following two were in the sidebar, above the Community Stats section.