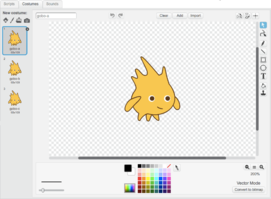 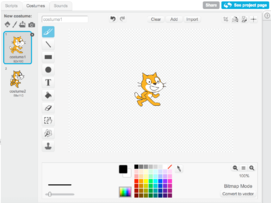 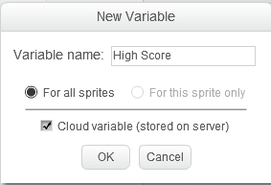 Scratch 2.0, also known as Scratch 2,[1] was the second major version of Scratch, following Scratch 1.4. It featured a redesigned editor and website, and it was the first version that included an Online Editor on the Scratch Website as well as an Offline Editor. It went into public beta on January 28, 2013,[2] and it was officially released on May 9, 2013. Its successor, Scratch 3.0, was released on January 2, 2019. The Scratch 2.0 online editor cannot be used anymore, as it requires the Flash Player, but the offline editor can still be downloaded.

Scratch 2.0 was announced by andresmh on the Scratch Forums in January 2010. The first released experiment by the Scratch Team as part of 2.0's development was the Experimental Viewer, in August 2010. Later, in 2011, a beta Flash Player was released for projects, which logged-in users could choose to use. In 2012, this was replaced by a version of the alpha editor; this version was made the default for all users that October.

In May 2011, the first known version of the project editor, the prealpha, was released to a limited audience at Scratch Day @ MIT. A little while after this, the Scratch Team started posting updates, called Scratch 2.0 Progress Reports, to their blog. The new website and redesigned project editor, by then in the alpha stage (at alpha.scratch.mit.edu), were premiered for a few days to the public for Scratch Day 2012, a year later. Over the rest of 2012, people were brought in to test this version: community moderators and selected educators; Collab Counselors, former curators, Scratch Design Studio curators, TBG moderators, and a group of 500 volunteers. Some users were also able to infiltrate and use the program due to a glitch.[3]

In December 2012, the public beta was announced to begin on January 28, 2013. It was available at beta.scratch.mit.edu from then on until its full release, upon which it replaced the previous website.

The Scratch 2.0 offline editor was released on August 26, 2013. It had few differences from the online editor, most notably, the lack of the Backpack and a different color used when text is selected. It can be downloaded here.

Scratch was completely rewritten in Adobe Flash for version 2.0 but could run projects from older versions of Scratch. It was still completely free and without ads. Due to the new features and different programming language, Scratch 2.0 projects were saved in the .sb2 format instead of the previous .sb format. However, projects uploaded from Scratch 1.4 can still be downloaded from the project page in the .sb format. Scratch 2.0 features many new additions to both the program and website.

Early in 2013 during the beta, some people disliked Scratch 2.0. They complained of a bad paint editor[6][7] and confusing project editor.[8] After the final release, the criticism slowly ceased as users finally adapted to the new environment.Template:Cn

One of the bugs in Scratch 2.0 was the ability for Scratchers to follow users who they could not normally follow, such as themselves or deleted users. To follow such users, the following JavaScript code was used:

Examples of New Features and Blocks

Retrieved from "https://test.scratch-wiki.info/w/index.php?title=Tur:Scratch_2.0&oldid=26387"
Cookies help us deliver our services. By using our services, you agree to our use of cookies.
Categories:
The Wiki is working on a dark theme, and you're seeing it! Got feedback? Post on the Wiki Forum Topic.