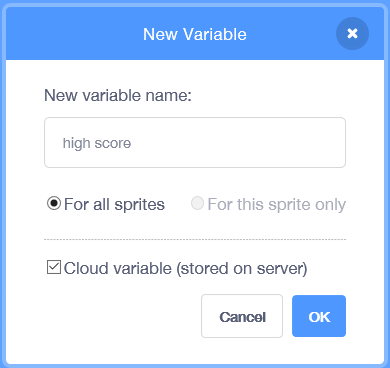 An optimized version would replace

with a When I Receive block for each possible broadcast.

Numbers encountered everyday are called "base 10" or "decimal" numbers. This is because 10 different digits are used (0 through 9). However, hexadecimal (often shortened to "hex") is another way of representing numbers. It uses 16 different digits. Since 16 digits do not exist when working with base-10, the "digits" a-f are used to represent digits 10 through 15. This means that "14" in base-10 is "e" in base-16. Cloud Data supports base-16, if the value starts with a "0x". For example, to set a Cloud Variable to "e" (14) you would run the block

Since each digit of a hexadecimal number stores more information than its decimal equivalent, it may help store more data before reaching the character limit (useful if a project requires lots of storage in Cloud Variables). To encode a base-10 number into a base-16 number one could run the following script (assuming that a whole number [integer] is being converted):

Retrieved from "https://test.scratch-wiki.info/w/index.php?title=Eng:Cloud_Data&oldid=21966"
Cookies help us deliver our services. By using our services, you agree to our use of cookies.
Categories: