The 2015 European Scratch Conference, also known as Scratch2015AMS, was the second European Scratch conference which takes place in August 12–15, 2015. The theme is "Creative Communites" and allows people to enrich the Scratch community. 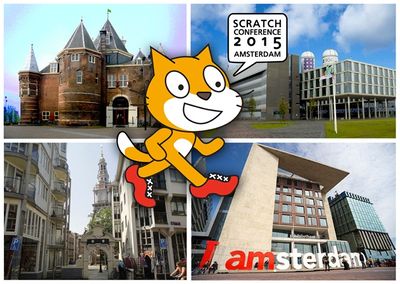 There should evolve a report of the Conference at this section (see more at de:Scratch2015AMS in German language):

Some sources can be found here:

Graphic Recordings of the Conference

The 10th Scratch Video Update (August 21, 2015) reports of the conference and was half filmed at the conference in Amsterdam itself (the other half part however is filmed at Paris). Ricarose und Eric vom Scratch Team tell of their Highlights and at the end there are some international voices (including de:-#Claude Terosier, de:-#Agnese Addone, de:-#Jens Mönig and de:-#Linda Fernsel).

The complete List of Events, Lectures and Workshops can be found in the Conference-Agenda (PDF).

Some of that Events include introductions to:

Retrieved from "https://test.scratch-wiki.info/w/index.php?title=Eng:2015_European_Scratch_Conference&oldid=5882"
Cookies help us deliver our services. By using our services, you agree to our use of cookies.
Categories: