An audio effect is an effect for sounds. They will be in Scratch 3.0. All of these effects except for pitch and pan left/right were removed on June 23, 2017, but will be added back in a future update.[1] 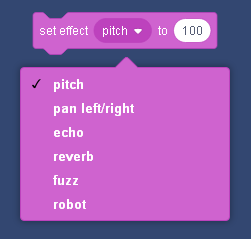 An audio effect block with a drop-down menu.

The echo effect causes an echo in the sound being played from that sprite. Common uses for this would be in caves to simulate the echo off cave walls, or using echo to make music spookier.

Similar to echo, reverb causes the audio to reverberate. Common uses are the same as echo. The "reverb" effect was a prototype effect, but was later discontinued.[2]

Note: a change of 10 corresponds to one half-step. So to go up a whole octave, you must set the pitch effect to 120, since there are 12 half-steps in an octave. A value of 100 will sound like a minor 7th. Same goes for negative values: to lower a sound by an octave, use a value of -120.

Right now the pitch effect works by changing the speed of the sound, although in the future the ST may change it back to only affecting a sound's pitch.

The robot effect metalles audio, causing it to sound robotic. An example use of this effect would be to record a human voice and play it with this effect to simulate a robot's voice.