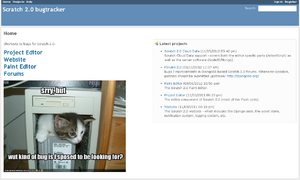 The front page of the bugtracker.

The bugtracker was a tool used for recording bugs that needed to be fixed and new features that should be added in Scratch. It allowed developers to see a list of bugs and features that need to be fixed or made. It was different from the Bugs and Glitches forum because only responsible individuals approved by the Scratch Team could add issues, and the bugtracker also had features that allowed for better tracking of issues. The bug tracker is now obsolete, as Github is used instead for the Scratch Team.

Every issue was put in one of five projects. Each issue would go in different places depending on what area of Scratch it concerned. The projects were:

Each issue on the bugtracker had a title, a status, a priority level, an assignee, a category, a target version, a description, and indication of either a bug or a feature.

The title of the issue appeared on the main page where all the issues were listed and on the issue's page.

A status indicated how far the developers have got to completing the fix or feature. Most statuses were either "New," "Pre-Flight," "Feedback" or "Closed."

Some issues were more important than others, so they all had different titles to determine their importance. Levels: Low, Normal, High, Urgent, and Immediate.

Each issue on the bugtracker had a target version. The target version was the version of Scratch the feature should be included in.

The description, which was only shown on an issue's page, was the place where bugtracker users could provide more detail. 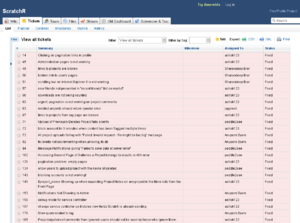 An image of the old bugtracker.

Only a handful of Scratchers had accounts on the bugtracker. Those who did are the Scratch Team, people who were Community Moderators, and users who had helped out with Scratch related projects.

For Scratch 1.x there was a different bugtracker. It was similar and each ticket had a milestone, an assignee, a status, a title, and a description. The first ticket was created in 2008 by andresmh [1] and the last in 2013 by Paddle2See.[2] There were 546 tickets created in total.

Retrieved from "https://test.scratch-wiki.info/w/index.php?title=Eng:Bugtracker&oldid=15294"
Cookies help us deliver our services. By using our services, you agree to our use of cookies.
Categories: