A game tree is a type of recursive search function that examines all possible moves of a strategy game, and their results, in an attempt to ascertain the optimal move. They are very useful for Artificial Intelligence in scenarios that do not require real-time decision making and have a relatively low number of possible choices per play. The most commonly-cited example is chess, but they are applicable to many situations.

There are a few major limitations to game trees.

Time
As mentioned above, game trees are rarely used in real-time scenarios (when the computer isn't given very much time to think). The reason for this will soon become apparent, but to put it brief: the method requires a lot of processing by the computer, and that takes time.
For the above reason (and others) they work best in turn-based games.
They require complete knowledge of how to move.
Games with uncertainty generally do not mix well with game trees. You can try to implement them in such games, but it will be very difficult, and the results may prove less than satisfactory.
They are ineffective at accurately ascertaining the best choices in scenarios with many possible choices

Game trees are generally used in board games to determine the best possible move. For the purpose of this article, Tic-Tac-Toe will be used as an example.

The idea is to start at the current board position, and check all the possible moves the computer can make. Then, from each of those possible moves, to look at what moves the opponent may make. Then to look back at the computer's. Ideally, the computer will flip back and forth, making moves for itself and its opponent, until the game's completion. It will do this for every possible outcome (see image below), effectively playing thousands (often more) of games. From the winners and losers of these games, it tries to determine the outcome that gives it the best chance of success.

If it does not make sense, just think of how you think during a board game. You think "if I make this move, he/she could make this one, and I could counter with this, etc." Game trees try to do just that. They examine every possible move and every opponent move, and then try to see if they are winning after as many moves as they can think through.

As one could imagine, there are an extremely large number of possible games. In Tic-Tac-Toe, there are 9 possible first moves (ignoring rotation optimization). There are 8 on the second turn, then 7, 6, etc. In total, there are 255,168 possible games. The goal of a game tree is to look at them all (on the first move) and try to choose a move that will, at worst, make losing impossible, and, at best, win the game.

Summary of What the Computer Does 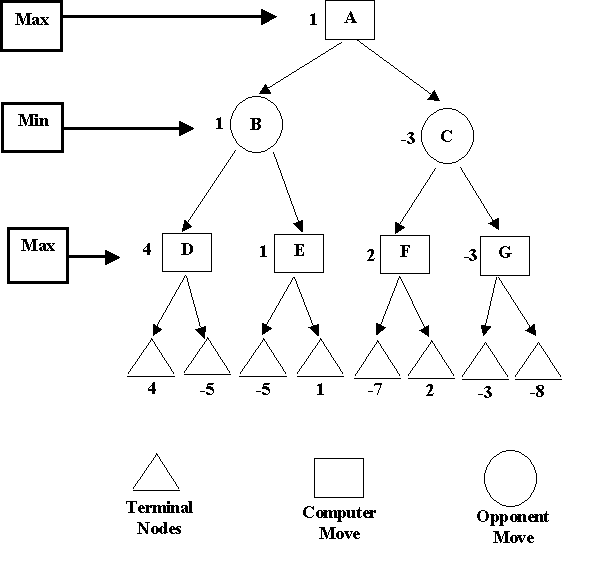 All game trees require the same script concepts. The names given to these scripts in this article are not official, but rather represent the functions of the scripts.

— This returns an Array of the positions possible to be obtained by a move made by a given player.

— This selects the best of the moves returned by the above script, with the logic described in the above section.

— This takes in a position and outputs if it is a completed game, and if so, who won.

The above method shows only the basic application of a game tree. In reality, the above method is not applicable to many games without some modifications. The above script should lay the ground-work for any game tree, but is not, by any means, optimal. Here are some ways to improve a game-tree's speed or performance.

Not Searching to Completion

Though searching every move is possible, it is often faster to just think forwards through the game about 3-6 moves. 6 moves are often enough to determine how good or bad a move may be, and does not sacrifice speed too much. Humans play a game similarly. We do not calculate through the entire game for each move; we always think through the consequences of a given move 3-6 moves in the future, and decide based on them. To put this into perspective, if the average chess position has 20 moves (an underestimate), and you want to search a game to completion, assuming an average of 40 moves per game (another underestimate), you'll have to search 20^40 positions (about 10^52). Even modern computers with incredibly powerful programming languages are incapable of searching anywhere near this. But computers are easily capable of searching 4 or 5 moves deep, and looking at the position to see who is winning, and this is what they do. Instead of searching 40+ moves deep, they search 2-8 moves deep and evaluate the end positions.

Of course, the computer's decision will not be perfect if it does not search to the completion of the game. Thus, depth is often the control behind difficulty levels. A more difficult computer player will search to a higher depth, but will have the disadvantage of being slower.

In chess, a more suitable way to see who is "winning" is to count out the points each piece is worth. For instance, the "value" of a board could be calculate by adding up all the "good pieces' points" and subtracting all the "bad pieces' points" (each chess piece is generally assigned a value, with a pawn being valued a 1-point, and a queen at 9 points). The more accurate your evaluation script, the better your moves will be, but the longer (in general) they'll take to run. It is important to find a balance between accuracy and speed. More speed lets you search deeper, while greater accuracy makes the depth you search more effective.

Other Ways to Improve Your Script

- While the elimination of one move seems insignificant, in larger branching factors, more moves can be eliminated. Continuing on to branch P, one can see the reverse happening. Q's value has been determined to be 4, which is less than I (which is 5). Since the max node will only choose the best move (and P can not be greater than 4), continuing to search branch P (to terminal nodes U and V) is unnecessary.
- If one can predict which moves are likely to be the best first, Alpha-Beta pruning becomes much more effective. For instance, if placing an "X" in the center of the Tic-Tac-Toe grid is, as a rule of thumb, more likely to be a better move than on the sides, checking the "put X in the center" move first can result in having to search less moves. 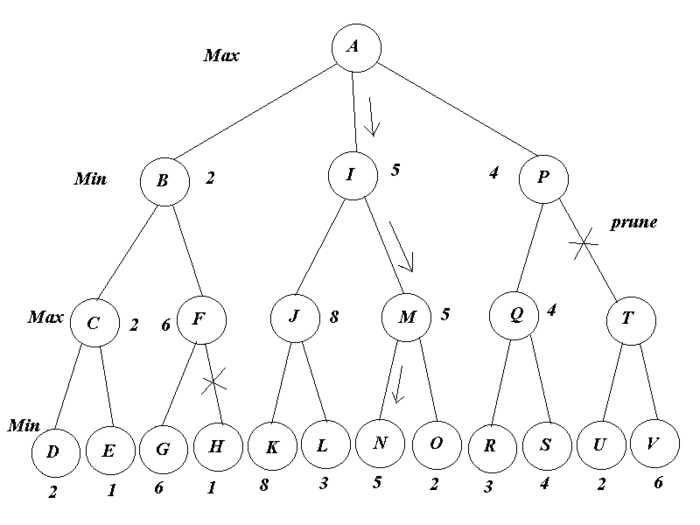 Problems With these Optimizations

Retrieved from "https://test.scratch-wiki.info/w/index.php?title=Eng:Game_Tree&oldid=16481"
Cookies help us deliver our services. By using our services, you agree to our use of cookies.
Categories: