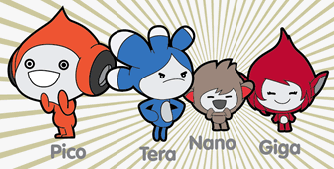 Gobo and Gobo's friends in an 2015 April Fools' Day image.

For Scratch 2.0, several new sprites were added to the default collection. Four of them are called "Gobo's Friends". They are, as shown in the picture on the right, Pico, Tera, Nano, and Giga. They are drawn by Wing Ngan.[1] Each sprite has four different costumes, one "happy", one "very happy", one "surprised", and one "sad or mad". Pico and Giga also have a walking animation.

Following the renovation of the Scratch Server Internal Error, all of Gobo's Friends had redesigns of them appearing in the Scratch website. The redesigns were drawn by Scratch Team member designerd.

Pico is orange, with round ears, and a point on top of his head.

Tera is blue, with round, feathery hair.

Nano is gray, with pink ears. He is the shortest of Gobo's Friends, but is also the widest.

Giga is dark red, with pointy hair, like Pico.

Retrieved from "https://test.scratch-wiki.info/w/index.php?title=Eng:Gobo%27s_Friends&oldid=16483#Giga"
Cookies help us deliver our services. By using our services, you agree to our use of cookies.
Category: