PicoBoard blocks (formerly known as Sensor Board blocks) is a subcategory of the More Blocks category in Scratch 2.0, containing blocks for use with the PicoBoard. They are color-coded dark grey-blue. Some of these blocks were in the Sensing palette prior to 2.0.

There are currently two Hat blocks, one Boolean block, and one Reporter block. Alongside Operators Blocks, it does not contain any Stack Blocks. 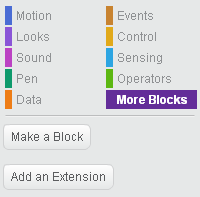 The "Add an Extension" button.

These blocks can only be used with a PicoBoard, but can still be viewed without one.