The Say () block is a Looks block and a Stack block. The block gives its sprite a speech bubble with the specified text 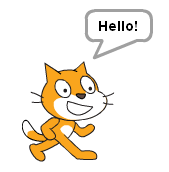 The Scratch Cat saying "Hello!" with the Say block

As this block gives an optionally everlasting speech bubble (see [[Eng:#Common Mistake|common mistake]] for how to stop the speech), it is often used for a speech bubble that is desired to end after an unspecified amount of time, such as a triggered event or statement.

Some common uses are:

The "say" block is often mistaken to stop saying the message when the script ends or moves on to the next block, but instead, the sprite continuously says the text until it says or thinks something else. To make a sprite stop saying a message, it must speak a blank message, which triggers the speech bubble to stay hidden and the sprite to say nothing.

The following script is an example of making a sprite say a message for an unspecified amount of time, and then stopping the message.

The say block can be useful for projects, as it can monitor certain values that the user needs to know about, by putting it in a forever loop. For example:

Retrieved from "https://test.scratch-wiki.info/w/index.php?title=Eng:Say_()_(block)&oldid=8523"
Cookies help us deliver our services. By using our services, you agree to our use of cookies.
Category: