Translate: - English
A shop is a project where a Scratcher can get resources (like sprites or scripts) sometimes, but rarely, on request. They can be very useful, for example, if one wanted to make make a game with fish, but did not know how to draw them, they could find an "Ocean" sprite pack. The resources are usually used through the backpack. 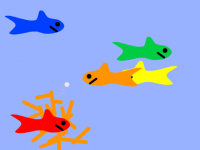 A sound shop is a project with sounds and music for other Scratchers to use. These kinds of shops are quite rare.[factually inaccurate?] A song shop is a project with songs, either as sounds or as scripts with the note-related blocks in the Sound category. They are probably the most common type of sound shop. Sometimes Scratchers will use songs from popular artists around the world, and put them in these kinds of shops.

A Voice Acting shop is a sound shop with voices, where Scratchers can request voice actors for a project they might be making.

A script shop is a project with scripts to use in a project. These are useful when you do not know how to make a script do something, such as make a cloud list.

One of the most common type of script shops is a custom block shop, where Scratchers create Custom Blocks for others to use.

An Idea Shop is a shop where Scratchers can get ideas for projects.

"Everything" shops have many different products, such as art, music, and scripts. These are very rare.[factually inaccurate?][citation needed]