Trigonometry is a branch of mathematics which consists of the study of right-angled triangles — specifically, the ratios of sides of right-angled triangles. Trig (short for trigonometry) functions simply return the ratio of a certain two sides of a triangle, given one angle; or the angle given a ratio of two sides. The point of trigonometry is to be able to quickly relate angles to side lengths and vice-versa to do otherwise complex calculations. For example, finding out the new position of a sprite after it has moved some distance given its direction is impossible without trigonometry. It was used by Pythagoras to prove his theory that a2 + b2 = c2, if c is the hypotenuse.

Basically, trigonometry is a shortcut to find relations that can be theoretically measured. It is a powerful tool, and has applications in all sorts of fields.

Trigonometry deals with angles and directions. The wider an angle is, the greater the measurement of it is. Below is a depiction of all the angles up to 360°. Angles that are greater than 360 degrees are coterminal to the lesser ones, meaning they lie in the same direction relative to the origin of a coordinate plane and have the same outcome in trigonometric functions. 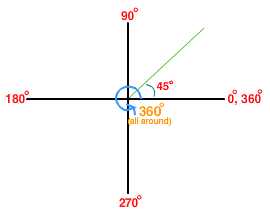 Notice how the angle increases as it rotates leftward. Rotating the angle to the right decreases it. An angle of 180°, 0°, and any of their coterminal angles depict the geometric figure, a straight line (which are technically quadrantal angles). Scratch directions initiate an analog instead of trigonometric style, therefore being inconsistent with trigonometry. Here are functions to quickly convert between the two:

In trigonometry, an angle is formed between two lines: an initial ray and a terminal ray. The initial ray always lies on the x axis. This is because mathematicians prefer it this way - it is a standard that is used to define the trigonometric values. Hundreds of years ago, if mathematicians desired the initial ray to be on the y axis, it likely would be today, but the standard was set and trigonometric rules apply to these specific standards. The other line is known as the terminal ray, which can be rotated about the origin of the coordinate plane.

Trigonometry deals with ratios between the initial and terminal lines. An example of this is shown in the following image:

This may seem confusing at first, but the concept is very simple. An angle is formed as the rotation between two lines or segments. The following image depicts angle size increasing:

Notice in the images below, the terminal line comes to a stop and does not go on forever. This relates to a scenario of the distance between two points. For instance, suppose the origin of the coordinate plane is an object. In that case, the end of the terminal side is another object, and the line represents the distance between those two objects, or mathematically "points". The terminal side will always be known as the hypotenuse in terms of geometry and trigonometry.

If any two ordered pairs have three related lines that form a triangle, if that triangle consists of a right angle (90 degrees), the ratio of the sides of the triangle are dependent and consistently based on the angle formed between the initial side and hypotenuse.

There are three major trig functions. To define them, we use the following names for sides: 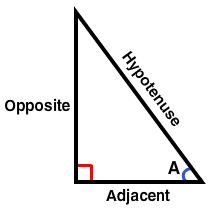 Caution: These are relative to angle A. The names change depending on the angle you consider.

To remember these functions, some people use "Soh cah toa", a simple acronym.

Reciprocal of any value is simply 1 divided by the value.

Trig functions have many uses in programming, especially in graphics and physics simulations. For example, consider a rock thrown at 30° at 5 m/s. To model the parabolic (curved) path of the rock, we need to split the tilted velocity into a horizontal and vertical velocity, then move the sprite by those values in the respective directions repetitively. Also, we need to constantly decrement the vertical velocity to account for gravity.

To split the values, we use trigonometry. We image a right triangle with one angle 30° and hypotenuse 5 m/s. Now, the opposite side must be the vertical velocity and the adjacent side must be the horizontal velocity. To find the opposite side, we find the sine of 30°, which is opposite/hypotenuse. We then multiply it by the hypotenuse (i.e. 5 m/s). The result, using a calculator to evaluate sin(30°)*5 is 2.5 m/s. We can use similar reasoning to find the horizontal velocity using sin(30°).

You are encouraged to attempt each of these to learn more about trigonometry.

—find the atan of the ratio of X motion and Y motion at any given point in time, and you should get the direction in which it is moving.

—use similar reasoning as the above

One of the great things about trigonometric functions is that they are all cyclic, which means they keep repeating. So you can get complex motions which repeat indefinitely without too much trouble.

—this is a simple application of sine and cosine. One interesting use of this is to make a sprite move perpendicular to the direction it is facing in, or move in a circle without changing its direction.

—this is a much more advanced application of trigonometry. It relies on the principle that any point in 3D, when rotated through some angle, will appear to move straight to a viewer (imagine staring at a single point on a spinning globe). The distance moved can be calculated with some more complex trigonometry.

Angles greater than 90 degrees have trig functions, too. In fact, the sin, cosine, secant, and cosecant of and angle A are the same as the respective function of A%360 (i.e. the remainder obtained when A is divided by 360). This holds for negative values of A, too. For tangent and cotangent, the value is A%180. The proofs of these are obvious if one looks at the sine wave or sinusoid, where the wave repeats every 2pi=360° times. The same applies to the other functions, with different graphs but the same principle.

Trigonometry is not just used with right triangles. The following equations apply to all triangles.

The law of sines

The law of cosines

The obvious use of this surprising but true identity is to find the third side of a triangle given any two sides and the distance between them, or finding the angles given three sides. This has many interesting uses, for example: If you have a spaceship-shooting game like Asteroids, you can program the AI spaceships to aim towards the point where the target will be when the bullet hits it (since during the time taken for the bullet to move, the spacecraft themselves change position linearly).

The law of tangents

However, they are basically the same.

To find the area of a triangle

For some of these done in Scratch, see Law of Cosines and Law of Sines.

Retrieved from "https://test.scratch-wiki.info/w/index.php?title=Eng:Trigonometry&oldid=16537"
Cookies help us deliver our services. By using our services, you agree to our use of cookies.
Categories: