A truth table is a table which displays the output of a Boolean logic circuit for various inputs.

The following is a list of logic operators, or gates.

The AND operator is very simple. It returns true if both conditions are true:

The NAND operator is the opposite of the [[Eng:#AND|AND]] operator, only returning false when both conditions are true. NAND means "Not AND".

There is no block for it in Scratch, but its name suggests its workaround:

The OR operator is very simple. It returns true if either or both conditions are true:

It differs from the AND operator when one value is true and one is false. AND returns false, while OR returns true.

The NOR operator is opposite of the [[Eng:#OR|OR]] operator, only returning true when both conditions are false. NOR means "Not OR".

There is no block for it in Scratch, but its name suggests its workaround:

The XOR operator returns true if either, but not both conditions are true. XOR stands for "exclusive OR".

It is not available with a block in Scratch, but can be simulated with the following script:

The XNOR operator returns false if either, but not both conditions are true. XNOR stands for "exclusive NOR". It is the opposite of the [[Eng:#XOR|XOR]] operation.

It is not available with a block in Scratch, but can be simulated with the following script:

It is sometimes called XAND.

NOT is different from the other operators in that it only takes one parameter. It inverts the value.

Many high and low level programming languages use a set of common symbols which represent logic functions.

(Note that the single and double versions of & have slightly different meanings. Similarly for |.)

In Python and some other languages, the words and, or, and not are used directly.

Logic operations are much more useful if combined. For example, T||(T&&F) returns true. By combining logic circuits, one can create different truth tables. One quick way to generate these, as well as a display of schematic diagram of the circuit, is WolframAlpha, a computation engine. An example can be found here.

Generally, the better method for evaluating booleans is something called short-circuit evaluation. This means that arguments should be evaluated one by one rather than all at once. For example, consider (1=0)&&(0/0 = 1). Here, conventional (eager) evaluation would result in an error since it would try to evaluate 0/0. However, with short circuit evaluation, it will first evaluate (1=0) and see it is false. Since && returns true only if all values are true, it automatically returns false without evaluating the second argument.

Scratch uses eager evaluation. This can be tested with this script:

which returns an error in Scratch. There is a rather simple workaround for short-circuit AND evaluation though: 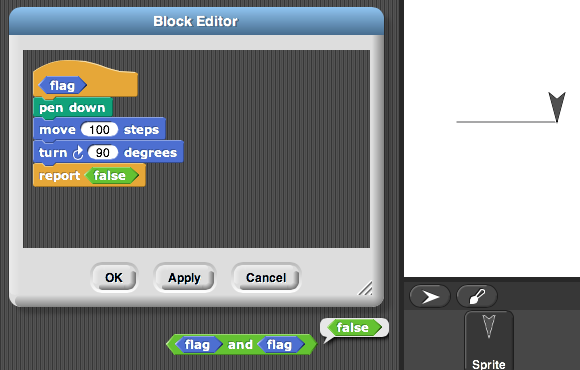 Also, a multiple-input AND that uses short-circuit can be created as shown: 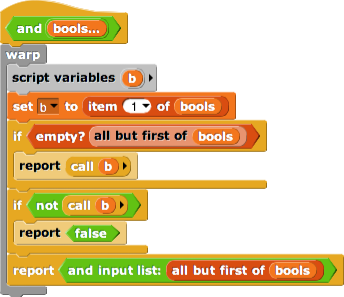 Retrieved from "https://test.scratch-wiki.info/w/index.php?title=Eng:Truth_Table&oldid=9578"
Cookies help us deliver our services. By using our services, you agree to our use of cookies.
Categories:
The Wiki is working on a dark theme, and you're seeing it! Got feedback? Post on the Wiki Forum Topic.