After its initial release in January 8, 2007,[1] Scratch started gaining attention and popularity. This page details notable cases of Scratch in the Media.

The chasing game studio for the Pursuitery class.

Pursuitery is an online website hosted on pursuitery.com that is designed to connect people who are interested in learning more. Pursuitery's front page contains links to various online classes, some of which link to a class called Coding with Scratch. This class repeats twice, with the first session running from June 16 to July 20, and the second session running from July 21 to August 24.[2]

The Coding with Scratch class is offered by the Connected Learning Alliance.[2] The goal of the alliance is to leverage modern day technology to spread interest-driven opportunities for learning.

The five lessons are listed below in chronological order:

— This week's challenge was to make a game where a human controlled player avoids a computer controlled player. The goal of the lesson was to "introduce key ideas in games and in how to use Scratch."[3]

— This week's challenge was to make a maze game. The requirements included impassable walls, a time limit, and at least two different mazes.

— This week's challenge requirements were to create a sprite that clones itself multiple times, and have the clones interact with the player.

— This week's challenge is designed to introduce interactive stories in games. The only challenge requirement is to make a story with at least two plot choices for the player.

— Unlike the previous lessons, participants are not supposed to make a new project, but to take a previously made project and "publish it" The challenge requirements are to add a high score list, sound effects, splash screen with credits, and instructions.[4] 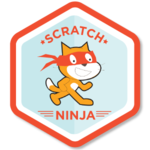 Most lessons include a contest, where participants are eligible for winning a MaKey MaKey. Submissions must be submitted before the first Sunday after the challenge begins, and only US residents of age 13 or older are eligible.

Participants are eligible to win a Scratch Ninja coding badge if all five lessons are submitted by August 24. 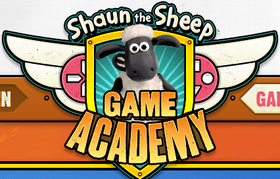 The logo for Shaun's Game Academy.

Shaun's Game Academy is a UK-exclusive competition hosted on shaunsgameacademy.co.uk for the best Scratch game project relating to Shaun the Sheep. The webpage features Scratch along with a getting started tutorial on how to understand the program. Project submissions are due by December 19, 2014 (formerly September 1, 2014). Only residents of the United Kingdom may enter.[5]

Aardman Animations and the charity Nominet Trust developed and are running the competition. On the Shaun’s Game Academy website, there are learning resources to get one started making games in Scratch, and a competition they can enter their finished games into. There are also some offline resources for parents and younger learners to get started using Scratch. Games must use characters and visuals from Shaun the Sheep, or remix any of the existing Shaun’s Game Academy projects on Scratch.

To develop and submit a project, do the following:

More than one project will be submitted, but only the top project per user will count.

If one is under the age of thirteen, he or she will be able to meet up with the "BAFTA award winning games team"[6] and brainstorm ideas for a game. A winner over the age of thirteen will receive an artwork of Shaun the Sheep by the storyboard artist. Unrelated to age, a winner will also receive a tour of the Aardman studios and a goody bag of toys and movies.

Some games made during the competition can be played and viewed here.

Each team consists of 2 students each with one computer. Internet cannot be accessed and you can only use the students' original content and the content built in with Scratch.

Each team has to come up with their original theme of their game. Games are expected to have the common characteristics such as collision detection and a title screen.

Judges will judge each team's game on what mechanics they contain and game play style.

SpaceX Falcon 9 Lander is a rocket landing simulation project by Dixitest (dixiklo's test account). The goal of the game is to try to land a Space X Falcon 9 rocket.

This project reached many news sites. It was used to demonstrate the difficulty of the task of landing a multimillion-dollar rocket. Articles generally started by introducing SpaceX and their plan of using reusable rockets. Articles went on to describe the Scratch project, and some ended on a nostalgic note.[8][9][10][11]

This is the second project to appear in the media since the removed Pac-Man project. The project received so many views that it crashed the Scratch website[12][13][14] and is the first recorded instance of a project's popularity causing a Scratch Server Internal Error. [citation needed] It is also considered as one of the most popular non-featured projects. [citation needed]

thisandagain, a Scratch Team member, explained what was going on, in the forums. This is what he said:

Cartoon Network is a TV channel that airs animated TV shows for kids such as Adventure Time, The Amazing World of Gumball, Steven Universe, Sonic Boom, and Teen Titans Go. They have collaborated several times with Scratch, with at least one more collaboration planned. [citation needed]

On April 7th, Scratch Team Member, ceebee created a studio with Cartoon Network. The studio is called "#Powerpuff Yourself". Scratchers are able to turn themselves into one of the Powerpuffs. The studio can be found here.

Retrieved from "https://test.scratch-wiki.info/w/index.php?title=Tur:Medyada_Scratch&oldid=21001"
Cookies help us deliver our services. By using our services, you agree to our use of cookies.
Category: