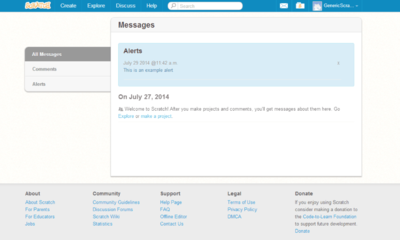 An image of an alert

Alerts are received in one's messages page for various reasons. Alerts are notifications from the Scratch Team sent to communicate with you. Only Scratch Team members can send you an alert, as they normally give you a reminder to stop doing a certain thing, such as to be more respectful when commenting. Alerts are usually given to users after the Scratch Team has seen a bad or disrespectful thing by them in the report queue, as that's where they see most of the bad content on the website. They usually remind you to stop doing something, but they can also be sent for other reasons.

A user may be sent an alert if they:

Alerts can be also sent if the Scratch Team is willing to communicate with a user privately, such as an invitation to a secret group.

Usage of alerts is not always for breaking the Community Guidelines. It can also be an important message (e.g. Become a scratcher)

Alerts differ from ordinary messages in that, unlike messages and notifications, they must be manually marked as read. This is to ensure a user reads an alert, rather than simply ignoring it - by accident or intentionally. There is a little button that says x in the top right corner of the alert. Once you click it, it will get removed from your normal messages page and is gone forever. Until the user receiving the alert clicks X, the alert will continue to show as a brand new message.

Like regular messages, an alert itself cannot be deleted from the message box. This was due to previous instances where users would immediately delete alerts and continue getting consequences [1].

As an alert is sent to a user by the Scratch Team, they generally carry important information and should not be disregarded.

Sometimes a Scratch Team member makes a mistake and sends an alert incorrectly. These can be appealed by sending a message on the Contact Us page.

If a Scratcher receives multiple alerts in a small time period, they may receive an account block. There are no exact requirements for being banned, despite misconceptions, but if two or more alerts, about the same thing, are received in a time period of around 6 months, the Scratcher is likely to be banned, as it seems they are not paying attention to the alerts they receive. If you get banned you can Appeal by filling out the form that appears on your userpage if you are banned.

Retrieved from "https://test.scratch-wiki.info/w/index.php?title=Eng:Alerts&oldid=14926"
Cookies help us deliver our services. By using our services, you agree to our use of cookies.
Category: