A studio curator is a feature in studios that was implemented in Scratch 2.0. You can invite curators to your studios for different reasons, such as having more people help you maintain your studio, adding them to a studio with a collection of certain Scratchers, or for any reason that you would like to invite them.

Once a user is a curator of a studio, they can do more things with the studio, as opposed to not being a curator or a manager. Curators can add any project to a studio, but some studios already have a setting on that allows anybody to add projects.[1] 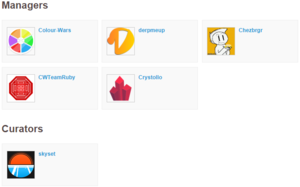 The curators tab on a studio.

The curators tab is one of the sections on a studio. Under the title of a studio, there are 4 links to different sections of the studio. The link to curators is the 3rd tab from the left. Currently, it only says Curators on the link, but it used to say Curators and then the number of curators and managers in a studio in parentheses to the right of it. The curator count was later removed on July 23, 2014 because the Scratch Team did not want people getting caught up on the curators number.[2] In the curators tab, it shows all of the curators and managers. At the top, in bold text, it says Managers. Below that, it shows all of the profile pictures of the managers, and a link to their profile with their username next to their icon. Below the managers section, it says Curators in bold text. It shows the same thing as the managers section, but instead it shows the users who are only curators of the studio. Only managers can promote curators to managers and invite new curators, though.

How to Become a Studio Curator

To become a curator of a studio, a manager must invite you to the studio. IF you want to curate a studio that nobody invited you to, you can ask to curate in the studio comments. Once a manager invites you, you will get a message saying who invited you to the studio, what the studio is named, and a link to the curators tab on the studio. When you go to the curators tab of a studio, there will be a blue box at the top of the page saying "You've been invited to become a curator of this studio. Click here to accept", and clicking the word that says here will make you a curator of the studio. The blue box will then be replaced with a light green one saying "Congratulations! You are now a curator of this studio".

Some users are annoyed of getting curator invites. [3] Occasionally users will add irrelevant projects to a studio.

Retrieved from "https://test.scratch-wiki.info/w/index.php?title=Eng:Curator_(studio)&oldid=6592"
Cookies help us deliver our services. By using our services, you agree to our use of cookies.
Categories: