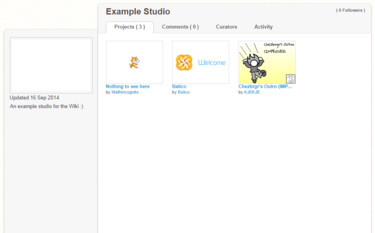 The button to create a new studio.

A studio without an icon.

You can change the studio image by pressing change picture at the top left corner of the current image and then selecting the image you want from your files. Scratch will automatically resize the picture so it will fit in the thumbnail. 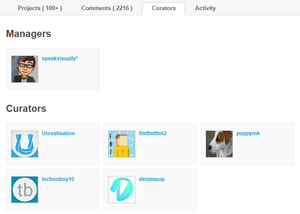 When you become a curator of a studio.

The button to promote a curator to a manager.

The link to delete a studio.

To delete a studio, go to your My Stuff page (make sure that you're logged in, or it won't appear). Select the Studios tab and search the studio that you want to delete. When you find it, click "Delete" next to the studio. However, you can delete only your own studios.

Retrieved from "https://test.scratch-wiki.info/w/index.php?title=Eng:Studio&oldid=16534"
Cookies help us deliver our services. By using our services, you agree to our use of cookies.
Categories: