The Disappearing Text Bug is a common bug in the Windows version of Scratch, first documented in Scratch 1.3, and was found in 2.0 by some users.[1] The Scratch Team seems to believe that the problem has been fixed. No one has experienced this problem since August of 2014.[2]

The bug appears at random. Programs running outside of Scratch can have an effect. The good news is that it only makes variable (not to be confused with Variable) text disappear. This means that any numbers or strings you typed in, broadcast names, variables/lists, dropdown menus, and the project name are immediately affected. 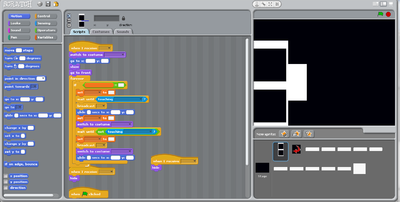 A severe example of the Disappearing Text Bug.

Once the bug arrives, text in thumbnail images, block names, buttons, and more vanishes. The order of disappearances is random, but is usually caused by attempts to edit or move possible victims of the bug.

The most common method of bringing the text back is to do the following:

— simply click OK and move on. Occasionally, "editing" a few costumes, saving, and reopening the project can work.

All text will be restored, but this method takes time if the project contains many items of text.

In some controlled tests where the Disappearing Text Bug has been replicated, simply saving your project, closing it, then reopening it, will restore all text. In some cases this must be done twice.

Another method is to repeatedly save the project instead of editing the costumes. This has to be done after the project has been reloaded, however.

The bug cannot be completely avoided, but it is possible to lower the chance of it appearing.

The following can be done:

— simply paint the text with the required tools.

The above will lower the chance or reduce the impact of the glitch, but will not stop it completely.

Retrieved from "https://test.scratch-wiki.info/w/index.php?title=Eng:Disappearing_Text_Bug&oldid=6690"
Cookies help us deliver our services. By using our services, you agree to our use of cookies.
Categories: