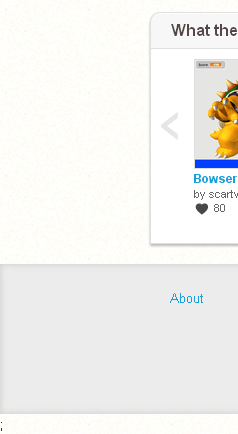 The semicolon in the bottom-left of the Front Page.

The "semicolon glitch" was a short-lived bug that arguably went down in Scratch history. In the bottom left of every page (except the Messages page) on the Scratch Website, a single semicolon appeared, outside of the footer. It was first reported on September 18, 2013.[1]

The semicolon appeared near the bottom of the source code, in the following lines:[2]

Most likely, it was supposed to go at the end of the line above. However, due to the fact that it was placed outside of the <script> tag, it was treated as page text by web browsers, and showed up.

Most of the consequences of this bug were minor. One was that all affected pages were made 18 pixels taller, due to the vertical space that the semicolon took up. That means that the website's footer no longer touched the bottom of the page.

The other, more serious consequence, was that a scrollbar appeared in the project editor, where it should not have appeared at all. This is because the project editor is sized to perfectly fit the browser's height. However, the semicolon added 18 more pixels on top of that height, so web browsers started showing the scrollbar to account for the extra height.[3]

The glitch was fixed on September 27, 2013,[4] though it was marked as "closed" on the bugtracker two days before.[5] This is because the code rollout that fixed the bug was on the 27th. The main discussion topic on the historical glitch was closed on December 3, 2013 due to it already being patched.[6]

After it was removed, many Scratchers commemorated it by placing a lone semicolon on the bottom line of their forum signature, or otherwise mentioning it.

One Scratcher made a browser extension to bring back the semicolon.[8] 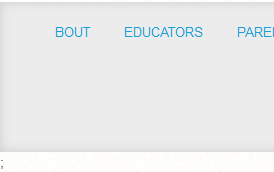 The semicolon specifically as of April Fools' Day 2014.

For April Fool's Day 2014, because the Scratch Team was aware of the sentimental value of the semicolon, it made its way to the bottom of the website once again. The semicolon's return was not announced anywhere, unlike the rest of the day's pranks.

Again, for April Fool's in 2016, the semicolon returned. It came with a new Scratch Emoji, a giant semicolon that made smaller semicolons explode across the screen when it was moused over. It could be created in comments by typing a semicolon between two underscores like this: _;_ Sadly, the emoji was removed along with the semicolon at the bottom of the page after April Fool's was over.

Retrieved from "https://test.scratch-wiki.info/w/index.php?title=Eng:Semicolon_Glitch&oldid=8999"
Cookies help us deliver our services. By using our services, you agree to our use of cookies.
Categories: