Net Scratch was an experimental version of Scratch 1.0.1 created by the Scratch Team which was never released; however, its web page was accidentally made public.[1] Net Scratch included new dynamic blocks. In addition, there were variables that could be shared over a network called "shariables"[2] which were associated with specific Scratch users. A few of the blocks were modified and used in later versions of Scratch. Strangely, all of the blocks appeared in the Advanced Search.

Net Scratch can be downloaded here.

The sensing blocks linked to the internet in Net Scratch.

Net Scratch is the only known version of Scratch to feature blocks that are linked with the internet (except some early alpha versions of Scratch 2.0). The server that the blocks retrieve data from can be changed by shift-clicking the Extras menu and selecting "change NetScratchServer IP address..." and then entering a new IP. It is also the only version to feature rectangular blocks which report strings (encapsulated in single quotation marks when shown on the Stage in a watcher) and fit in the same inputs as reporters. These blocks are:

This block returns the current value in the given postal/ZIP code. The options for the first input are temperature (in degrees), weather conditions, humidity, wind chill (what temperature it feels like, wind included), wind speed, wind direction, latitude, longitude, sunrise, sunset, city, state, and time.

Another Word for (Word)

This block returns a random synonym for the word given, if one is available. The synonym changes every few seconds.

(Word) of the Day

This block returns a random word which changes every day. If the definition is chosen on the drop-down, it returns the definition of the word of the day.

(Joke) of the Day

This block is similar to the Word of the Day block, but returns a joke or its punchline, depending on the drop-down value.

Contrary to the block's name, it always returns the question "What happened to Ask Yahoo?" referring to a block that can only be found in the source code.

Gives a random name of a Scratch project, made by the user one types in. Its default value is tammy. It can also return a random friend or the user's location via the drop-down. The random values change every few seconds. 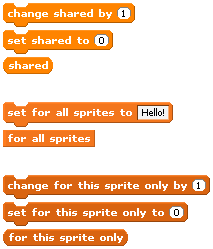 The colour-coded variables in Net Scratch.

There are two types of variables with different values they can hold, strings (rectangular-shaped) and numbers (reporter-shaped). Additionally, they are colour-coded based on whether they are shared, for all sprites (global), or for this sprite only (local). Variables created on the Stage may only be of the former two. It is unknown what the difference between shared and for all sprites is, but it may have something to do with network connectivity. This is strengthened by the fact that there is an "import variable" button which says "No global variables" when clicked. This happens because there is no active Net Scratch server running to list the variables.

The concept of "shariables" may have been part of the inspiration for cloud variables in Scratch 2.0 (and also influenced another project, Learning with Data[3]).

Some blocks such as "Clone" and "Ask Yahoo" were found in the source, but are not accessible without manually adding them to Net Scratch. Additionally, Net Scratch included a version of () = () that accepted strings as well as numbers, two and half years before it finally surfaced in Scratch 1.4.

A modified version of Scratch 1.4 that includes the internet blocks from Net Scratch was made by dav09 and MathWizz and released on January 8, 2011. Its forum topic can be found here and it can be downloaded from here.

Retrieved from "https://test.scratch-wiki.info/w/index.php?title=Eng:Net_Scratch&oldid=7833"
Cookies help us deliver our services. By using our services, you agree to our use of cookies.
Category: