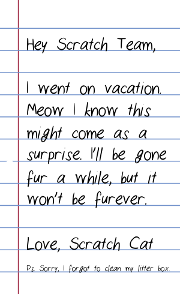 The note by Scratch Cat

Scratch Team released a video about Scratch Cat's vacation that started off with a 2007 Introduction to Scratch Programming Language being shown off by Mitchel Resnick and then Scratch Cat walking with a Backpack. The video then continues on and explains that Scratch Cat has been helping invent for 9 years and now they decided to go on a vacation to find their inner kitten and see the world.

Where in the World is Scratch Cat?

Scratch Cat left clues in projects and people were making projects to give their ideas on where Scratch Cat was. The big motto was "Where in the world is Scratch Cat?" There were 9 Clues that were released. I created a Studio for all of the clues. You can see the clues here. A lot of projects were made for the occasion. A studio was also created and can be viewed here. Despite the ScratchCation being over and Scratch Cat back at home, the Studio is still active, and gets new requests often.

Users who's projects were added to the Studio before April 2nd 2016 got their picture of where Scratch Cat was placed in the Vacation Scrapbook. In the Notes and Credits as well as the project itself there were the usernames of all the Scratchers that had their pictures in the scrapbook. Assets from the clues were used, because the Sprite of Scratch Cat from each clue game a hint on where Scratch Cat was. That had the community making scenes based off the sprites, making the sprites more suitable for the scene.

Retrieved from "https://test.scratch-wiki.info/w/index.php?title=Eng:ScratchCation&oldid=8552"
Cookies help us deliver our services. By using our services, you agree to our use of cookies.
Categories: