Scratch Extensions make it possible to connect Scratch projects with external hardware (such as LEGO WeDo or PicoBoard) or sources of information on the web. They add a collection of command and reporter blocks that can be used to interact with a particular device or data source. When an extension is enabled, its blocks appear in the "More Blocks" palette. 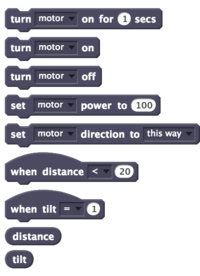 To add an extension, go to the "More Blocks" category in the Scratch Editor and click "Add an Extension."

The button to add an extension in Scratch 2.0.

There are two types of extensions in Scratch 2.0: hardware and web.

There are two mechanisms to extend Scratch 2.0, either with HTTP requests or Javascript.

This extension mechanism uses Javascript to create the extensions. The official documentation for creating this kind of extension can be found on the scratch-extensions-docs github repository, along with sample extension code.

The current extensions available in the online editor, like the PicoBoard extension, are Javascript extensions.

Note: This mechanism works only with Scratch 2.0 Offline Editor.

Scratch 2.0 cannot interact with hardware devices directly. Instead, hardware extensions come with a helper app, a separate application that the user must install and run on their computer. Scratch communicates with the helper app via HTTP requests, and the helper app talks to the hardware. In the future, some extensions may package their helper apps as browser plugins.

The Scratch 2.0 extension mechanism is still under development, and Scratch Team is still figuring out how the extensions will be shared and distributed.

An extension distribution strategy is still being worked out. The Scratch team will probably host a small library of "supported" extensions. Users will be able to browse and select extensions from this library from within the Scratch editor. Supported extensions would be checked for quality and safety by the Scratch team. There are likely be strict criteria for including an extension in the Scratch-team supported extensions library, such as command set clarity and ease of use, size of the potential audience, widespread availability of any associated hardware, and a long-term commitment to support the extension.