The Scripts Area is where scripts can be assembled.

The Scripts Area is the area on the right side of the project editor where scripts are assembled. It can be accessed from both the Stage and from sprites, although the Stage and each sprite all have separate scripts areas and scripts. It is a gray pinstriped rectangle, whose size can be changed by clicking the buttons next to the button to toggle.

The Scripts Area menu consists of three options when right-clicked. It can also be brought up by holding down the left mouse, as a feature for one button mouses. The options are:

When a user right clicks on a block in the editing area, they get the following options as well as "Add Comment":

These options are only available for custom blocks:

Some blocks have other options, these options change the block to a similar block, this applies to:

To code in Scratch, simply drag blocks out from the eight palettes and assemble them in the Scripts Area. If necessary, scroll bars will appear to extend the area downwards or to the right. You can also change values of blocks that are in the block palette, but changes back to default when the palette is redrawn.

Blocks can be removed by dragging the block(s) into the block palette. Another way to delete blocks is to right-click (control-click also works on Macs) and click "delete" in the drop-down menu that appears. 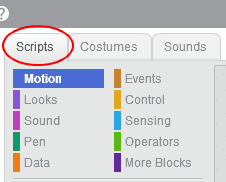 There are two easy ways to switch to the scripts area:

The Scratch 2.0 scripts area showing a script and the context menu.

In Scratch 2.0, the scripts area is styled differently, with light gray dots over a silver background, and is also on the opposite side of the screen. Users can access the content menu by shift-clicking[1] or right-clicking. The menu has choices to zoom in or out of scripts, which can be helpful for finding a script or moving a script a long distance.

Retrieved from "https://test.scratch-wiki.info/w/index.php?title=Eng:Scripts_Area&oldid=8962"
Cookies help us deliver our services. By using our services, you agree to our use of cookies.
Categories:
The Wiki is working on a dark theme, and you're seeing it! Got feedback? Post on the Wiki Forum Topic.