The context menu in the Scripts Area.

A context menu is a menu which provides extra options about an item, which are traditionally accessed by right-clicking, shift-clicking, or control-clicking.

Scratch has some of the following right-click options for different parts of the program:

— Organizes oddly placed scripts. Scratch will order them vertically on the left side of the Scripts Area, with a slight space in between each.

— Allows for a user to save a picture of all the scripts in the area. This option opens the Scratch File Browser, which allows a user to choose where in their system they would like to place the image, which may be shrunken if necessary. It is a .GIF file.

— This was created as a replacement for the comment block in Scratch 1.2 beta. It was removed because it confused users; it has no effect on a sprite's scripts. After much protesting of its removal on the Scratch Website, the current comment feature was introduced in Scratch 1.3. It allows for a user to type notes or helpful comments in a convenient area, usually explaining how their scripts work. The user can also attach it to scripts and adjust its width. Despite all of their help, comments greatly slow a project's *Speed — they are sometimes avoided or placed detached from their wanted places in their script.

— These options will be added in Scratch 2.0. They zoom the Scripts Area, to make it easier to see blocks.

— Opens the "help" dialog for that block. This is the only option while the block is in the Block Palette.

— Duplicates the stack below that block. If in a C Block, duplicates until the end of the C.

— Only available on the top of a script (a stack of blocks with no hat is considered a script for this purpose), it works similarly to duplicate, but deletes instead of copying. 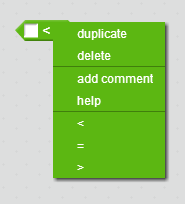 The "edit" option in the Define () block's context menu in Scratch 2.0.

In Scratch 2.0, the Define () block has an "edit" option to change the parameters of the procedure.

— Removes the costume from the current sprite, and adds it to a new one, with no other costumes, scripts, or sounds.

— Exports the costume as a file on the user's computer.

— Exports the sound as a file on the user's computer.

— If the hide block has been activated on it, it shows the sprite. If the ghost effect is above 70, it sets it to 0. If the size is less than 10, it is set to 100. If the absolute value of the Y position is greater than 180, or the absolute value of the X position is greater than 240 (i.e. the costume center is off of the coordinates of the Stage), it moves to 0@0. If it is not on the top layer, it moves to the top.

— Exports the sprite as a .sprite file on the user's computer. (In Scratch 2.0, this is "save to local file".)

— Creates a copy of the sprite.

— It is unknown what exactly this does, or how, but it most likely saves the sprite to the server. (Added in Scratch 2.0.)

Sprites on the Stage

The "export this sprite", "duplicate", and "delete" options are here as well, but "show" is unnecessary because if it wasn't visible, it could not be clicked.

— Select an area of the Scratch IDE to become a new costume for the sprite.

Resizing a sprite via the context menu.

Rotating a sprite via the context menu.

— creates a handler to rotate the sprite.

— Select an area of the Scratch IDE to become a costume for a new sprite.

— Saves a screenshot of the Stage as it is to the user's computer.

— Switches to the normal look

— Switches to the large look, only showing the value

— Switches to the slider look for variables, which allows the user to change the value by sliding it

— Exports the list to a .txt file, putting each item on a new line.

The current style of these menus will change with the release of Scratch 2.0. They will be more rectangularly shaped, without rounded corners. They will also be color-coded. For blocks, it will show in the color of the block. For other things, they are gray.

Other menus in the Scratch 1.x series share the look of context menus; for example, menus in the File/Edit/Share/Help menus, and also Shift-Click-R.

In the Scratch 2.0 pre-alpha and early versions of the alpha, the context menu was only available through shift-clicking. This is because the Adobe Flash context menu opened upon right-clicking. Eventually, the Scratch Team found a way to have the Flash menu hide as soon as the mouse is let go of, but the Scratch menu stay until a further click. They did not want to completely disable the Flash menu as Scratchers might need it, such as to check their version of Flash, or to change settings.

This article or section documents an outdated version of Scratch (version 2.0). For this article in Scratch 1.4, see Eng:Context Menu (1.4).

Retrieved from "https://test.scratch-wiki.info/w/index.php?title=Eng:Context_Menu&oldid=6505"
Cookies help us deliver our services. By using our services, you agree to our use of cookies.
Categories: