The Scratch Website is the official website for Scratch, in which users can upload and view projects, as well as communicate with others through comments on profiles, studios, projects, and posts on the Scratch Forums. The URL of the Scratch website is https://scratch.mit.edu/.

The Scratch Website is extremely customizable; other users can be followed, studios can be created, and projects can be deleted. Other users' profiles can be viewed as well.

The early Scratch Website was much smaller, as it housed a smaller community. Example differences are that the Front page contained far fewer rows, the forums were smaller, and pages were fairly different. 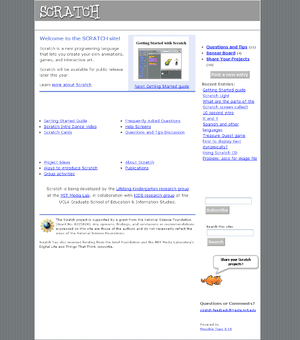 When Scratch was first announced to the public they started with small blog. After a while, for the picked testers, they opened a page on the blog where Scratch projects could be shown and played by the public. Once Scratch was released to the public, hundreds of Scratchers starting making projects and wanting to post them to the Scratch blog. The Scratch Team then decided to extend the blog into a full website so everyone could post their projects and give feedback to one another. When Scratch was first made it did not have a website as developed as the current one. It was just a single web page introducing Scratch and giving some links to "Scratch Cards" and "Tutorials". Over time, the creators of Scratch created a community as they saw that one could be effectively created.[1]

The structure of the website has changed over time. New features such as Scratch Design Studios were introduced, along with entirely new areas such as the Text-based Games Forum. There has been renovation as well; such as an entire change to the Front Page (also allowing a row specifically for curators) or forum changes (archiving, creation).

In May 2013, the entire Scratch website was updated to Scratch 2.0. The site underwent many changes, including a new project editor online with many new features, such as procedures and cloning; an updated look; new features on the site, such as Explore, My Stuff, and Related Projects; an updated Front Page; and fresh forums (the old ones were archived). 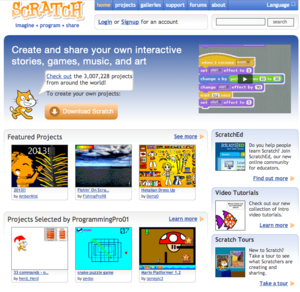 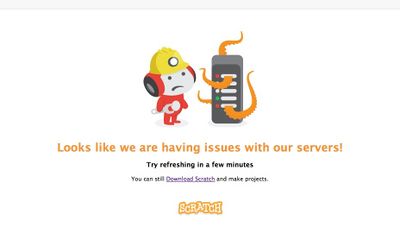 Retrieved from "https://test.scratch-wiki.info/w/index.php?title=Eng:Scratch_Website&oldid=8894"
Cookies help us deliver our services. By using our services, you agree to our use of cookies.
Categories:
The Wiki is working on a dark theme, and you're seeing it! Got feedback? Post on the Wiki Forum Topic.