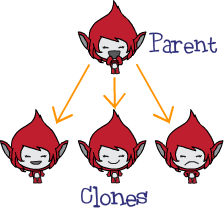 With the introduction of 分身 in Scratch 2.0, 专案 have many efficient capabilities to perform tasks without creating an extensive number of 角色s. Clones are instances of sprites, meaning they inherit the properties of the sprite but are separate objects. Clones commonly may have a slightly different task to perform than the parent sprite, but one barrier is that both clones and sprites respond to almost all of the 事件类积木 (triggers). Therefore, a trigger specifically designed for a sprite will also be run by a clone when signaled.

One way to understand the concept is with the following simple 程式:

Contrary to its name, if a clone of the sprite containing the above script was to be clicked, the clone itself would perform the script. What if one only desires for the sprite and not its clones to respond to the script? One can customize which triggers are run by what class (i.e. parent sprite or child clone) through the simple use of a 局域变量. 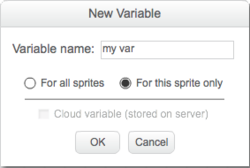 Private 变量 store values for individual sprites and clones, although they have the same name. For example, three clones can have a variable named "x velocity", but each clone can have its own individual value of its variable. In a similar way, a sprite can have a variable set to a particular 字串 while every clone has it set to a different value. This concept of differing variable values between classes allows one to choose which scripts are run by the parent sprite or child clones.

When the 绿旗 is clicked, all clones are immediately deleted but the parent sprite still exists. This is the correct time to set the sprite's variable to an indication of its class (position on the hierarchy).

Retrieved from "https://test.scratch-wiki.info/w/index.php?title=Zho:分身和角色的分别触发&oldid=17660"
Cookies help us deliver our services. By using our services, you agree to our use of cookies.
Category: