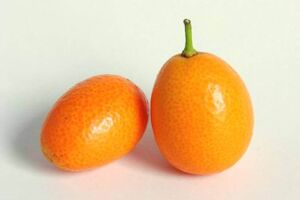 An Evil Kumquat is a rumored creature which is commonly said to eat forum signatures. In reality, it was a joke started by Scratch Team member Cheddargirl. Kumquats are actually a fruit in the orange family native to China; today they are grown all across the world.

Cheddargirl's signature before being "eaten" by an evil kumquat.

The trend was started in the Scratch 2.0 Beta by the Scratch Team member Cheddargirl, who discovered that the image host that held their signature was no longer supported. Instead of rebuilding her old signature, she changed her signature to:

The trend spread very quickly, and about 0.017% of all signatures (215 signatures in total) mention kumquats.[citation needed] You can read cheddargirl's story in her studio that can be found here.

Some users reversed the trend, and said that their signature ate an evil kumquat.[citation needed]

Some users make scripts about kumquats in their signatures using the [scratchblocks] BBCode, such as:

The act of placing a kumquat message in your signature is occasionally called "kumquatting."[citation needed]

Retrieved from "https://test.scratch-wiki.info/w/index.php?title=Eng:Evil_Kumquat&oldid=6797"
Cookies help us deliver our services. By using our services, you agree to our use of cookies.
Category: