Scratch 2.0 is a completely flash-based program, in which both the project editor and project page viewer use the same player, the Flash player. The Flash player was first introduced during the previous Scratch website as an alternative to the Java Player. The Scratch Team were testing it out for Scratch 2.0, which was unreleased at the time, and they continuously updated the player.

What showed under the download option when the project was running in the Java Player.

Allowed a Scratcher to use the Java Player instead of the Flash one.

There are several noticeable changes from the Java player. Some of these include:

This eng is about the version in Scratch 2.0. For the feature in Scratch 1.4, see Presentation Mode. 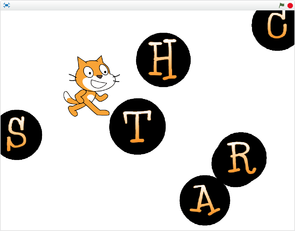 button is clicked, it goes into full screen, which almost fits the computer's resolution, through displaying tools; and when the

button is clicked, the resolution adjusts back to normal size.

button, it can be put into total full screen, in which the vertical resolution exactly fits the computer's. You must shift-click again while in total full-screen to switch back into the normal mode. 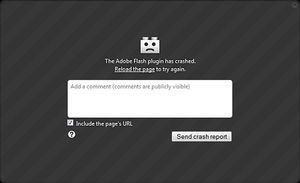 A screen which pulls up when the Adobe Flash Player crashes

If the Flash Player runs something which causes too much lag, the Adobe Flash Player will crash. The user can reload the Flash Player by reloading the page. On certain browsers, there's an option to send a crash report. However, this isn't necessary.