Though Scratch is designed for people totally new to programming, it can still be a challenging program to wield. Consisting of a script, paint, and sound editor, it has complexity to its structure. This tutorial is aimed toward individuals completely new to all programming and looking to understand the concepts of Scratch. 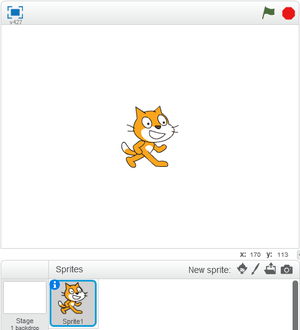 Projects are animations, stories, games — just about everything made in Scratch! The Scratch program is used to make Scratch projects, which can be shared to the world by the Scratch community. In other terms, a project is the created application that is run.

The Scratch interface is divided into two sections: the project running environment and the project development. In the top-left of Scratch is the Stage, shown at the top of the image on the right. The Stage is where a Scratch project is physically run, so when one plays a game, the Stage is the window in which it is run. By default, the Scratch Cat is on the stage. The Scratch Cat is simply one of many sprites, or characters, buttons, etc. in a project. Characters are programmed to perform anything one wants! The flexibility of Scratch allows the creator to be imaginative and actually make the desired project. That is when programming comes in to place, as it "makes things do what they should".

Before getting more into the interface, the quickest way to understand how sprites are programmed in Scratch are by testing things out. Follow the steps below when the Scratch program is opened with a clean, new project. 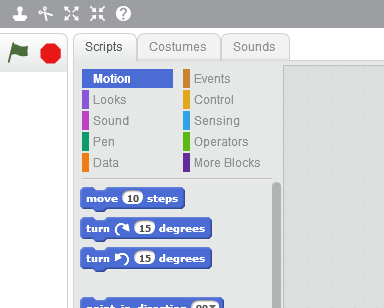 3. Release the mouse to place the block; make sure the block is placed in the darker-grey, technically called the scripts area. 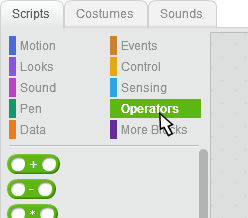 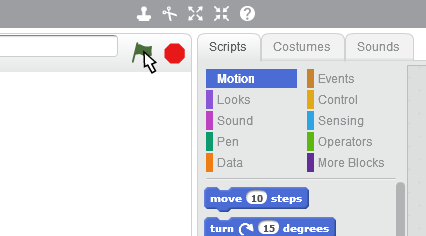 You can also check out some tutorials on Scratch. There are a wide variety of tutorials you can choose from that range from how to make your sprite move to making your own story! Here is a link to the tutorials.

Retrieved from "https://test.scratch-wiki.info/w/index.php?title=Eng:Getting_Started_with_Scratch&oldid=6998"
Cookies help us deliver our services. By using our services, you agree to our use of cookies.
Category:
The Wiki is working on a dark theme, and you're seeing it! Got feedback? Post on the Wiki Forum Topic.