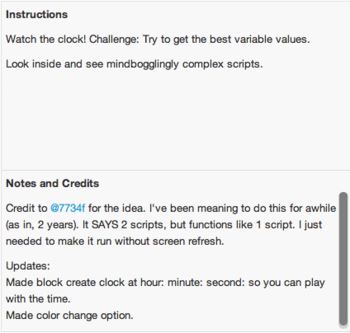 An example of Project Notes.

The Project Information feature is a way for Scratchers to type documentation that goes with their projects for other Scratchers to see and understand what the project is about. They are separated into two sections, the "Instructions," and the "Notes and Credits." Only the sharer of the project or member of the Scratch Team can edit the project notes. This is to avoid false information and to ease the project's owner. Project notes can be found on the right of a shared project's page.

There are two sections to the project notes. If the instructions are left blank, the Notes and Credits section takes up the whole column.

Project Instructions is a place where one can put instructions to their game, such as keys to press. It can also be used as a strategy guide of some sort. 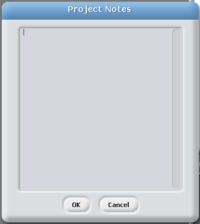 Notes and Credits allows Scratchers to explain some facts about how they made their project (such as how long it took them and where they got the idea) and to give credit where it is needed. It is also used to add side notes on a project, advertisements and the version number. This is the only section shown if the user does not type anything in the Instructions section.

Because of crediting problems when remixing, the section is also outlined blue and has a prompt to add credits when a project is a remix. The box and prompt goes away when something is typed in the box.

Project notes can only be typed online at the moment.

Online editing can only be done one way: Clicking the project notes area on a project's page. A text box appears, and text can be inserted. However, many users have complained of the small space to write their text in —some instead type in a word processor and paste the text.[1]

Studio Notes are the same as project notes, except they contain information about a studio rather than a project.

Project notes are generally used for explaining information about their project. Some examples of uses are:

However, Project Notes are also used in other ways, such as:

There are also other multiple ways the Project Notes are used for, but there are too many to list all of them here.

By default, the Project Notes in a Scratch project are blank. If you want to provide questions or instructions whenever users first edit a project’s notes, you can create a default Project Notes file. Simply make a text file with your default notes, save it with UTF8 encoding, name it "defaultNotes.txt", and put it into the Scratch folder. 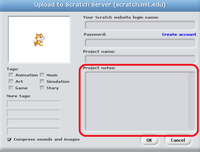 Editing the project notes before uploading in the Scratch 1.4 offline editor.

In Scratch 1.x there was only one section called "Project notes." It could be edited when you uploaded a project from the editor as well as online.

Retrieved from "https://test.scratch-wiki.info/w/index.php?title=Eng:Project_Information_and_Help&oldid=8173#Project_Instructions"
Cookies help us deliver our services. By using our services, you agree to our use of cookies.
Categories: