The remix message that appears below a project.

A remix is a modified and shared version of an uploaded project. Remixes, and all projects, are always under the Creative Commons Attribution-Share Alike License, the license Scratch uses. As of December 2015, about 29.5% of all recently shared projects are remixes.[1] 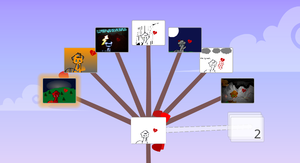 An example of a remix tree.

The Remix Tree is a way of showing an extensive hierarchy of remixes originating from one project. To access the remix tree of a project, click the "tree" button at the rightmost edge of the project statistics bar. When visualized, hearts are bundled near projects with many love-its, and one can navigate through the various branches and explore the chains of remixing. If a project has too many remixes, not all remixes will be shown simultaneously, but instead one can select folders of remixes which will then unravel.

Retrieved from "https://test.scratch-wiki.info/w/index.php?title=Eng:Remix&oldid=8302#Remix_Trees"
Cookies help us deliver our services. By using our services, you agree to our use of cookies.
Categories:
The Wiki is working on a dark theme, and you're seeing it! Got feedback? Post on the Wiki Forum Topic.