The Scratch Design Studio section on the front page.

The Scratch Design Studio (commonly abbreviated SDS) is a themed studio, featured on the Front Page, that is changed approximately every month. These themes can range from holiday celebrations to underwater scenes, sports, and much more. The current theme is "Eng:Scratch Design Studio/Current Studio".[1]

On March 31, 2016, it was announced that the Scratch Design Studio would finally end and concluded with the final studio, "The Last SDS".[4] This was later revealed to be an April Fools joke.

Scratchers can share projects and submit them with links in the comment section of the Scratch Design Studio, where Scratch Team members and some priveledged Scratchers will add the projects they deem fit to the studio. Scratch Design Studio Curators are Scratchers who can add projects. SDS helpers can't add projects, but can help the studio in other ways. There were previous curators who are currently inactive and have left. All moderators and the Scratch Team have the ability to add projects as well but generally only do so when extra help is needed.

When loaded, the Scratch front page will randomly select twenty projects from the studio and display them in the row titled Scratch Design Studio - 'SDS theme'. When the page is refreshed, a new group is chosen. Users may only have one of their own projects added to the Design Studio per theme.

SDS curators, in addition to their privileges of managing the studio, can also choose themes (with the help of the Scratch Team), help find new curators when needed, have access to curate the "Propose SDS Themes" studio, and provide feedback to the theme idea projects.

A new design studio generally comes out every month, albeit occasionally earlier or later. Some design studios have lasted up to two months.[5] Studios are first discussed by Scratch Design Studio Curators in the Scratch Design Studio forum (see next section) before being approved by the Scratch Team. A Studio requires at least 7 seed projects before being featured as the next SDS on the front page as was revealed by SDS Curator 4LeafClovR.

The Scratch Design Studio row on the Front Page.

This section is the fourth row from the top.

Upon becoming an SDS Curator, one will have access to the private SDS forum. It is used to talk about things related to the SDS; such as new studios, possible curators, ideas, and features.

An image of the private SDS forum

There have currently been a total of 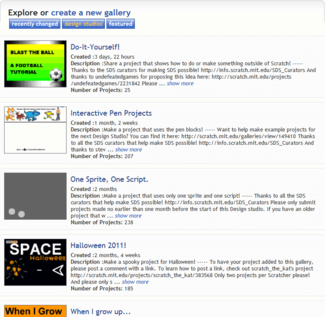 The list of Scratch Design Studio studios in Scratch 1.4

They are as follows, from oldest to newest:

Retrieved from "https://test.scratch-wiki.info/w/index.php?title=Eng:Scratch_Design_Studio&oldid=24372"
Cookies help us deliver our services. By using our services, you agree to our use of cookies.
Categories:
The Wiki is working on a dark theme, and you're seeing it! Got feedback? Post on the Wiki Forum Topic.