The Scratch 2.0 Offline Editor is a version of the Scratch 2.0 program that can be downloaded to a computer, as opposed to the online Flash editor. This is useful for those who wish to program without an internet connection.

Main article: What are the System Requirements for Scratch?

For Scratch to run properly, the following minimum system requirements are needed:[1] 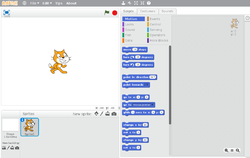 The beta version of the offline Scratch 2.0 editor was released on August 26. The current offline editor can be downloaded from the Scratch site. It requires Adobe AIR, a runtime system for desktop applications, to run, which is included in the installer.

When downloading the Scratch 2.0 offline editor you will be using 903 bytes in total.

The File menu of the offline editor

The offline editor has a few differences from the online editor. The File menu has different options, including a "Check for update" option and a "Quit" option which closes the Scratch program. You can share projects to the Scratch website, by accessing the File menu and clicking Share to website. Projects are named by saving the project to one's computer (unlike the online editor, where text input above the stage is used). The offline editor still displays the name above the stage, though.

The tips menu also shows in full-screen mode in the offline editor. The top-right of the project editor, instead of displaying the login link or one's username, displays the text "Offline Editor (beta)".

The offline editor saves all projects in .sb2 format. There are not major differences between the offline editor and the online, apart from optimization for offline use. The Scratch offline editor will update frequently along with the online editor,[citation needed] so a notification will be pushed to the computer to warn of an update, and will allow the program to update without uninstalling.

Cloud variables are also not available in the offline editor, presumably because users can not log in.

Sharing is now supported and is a similar process as Scratch 1.4's; however, it does not allow project instructions, notes, or tag inputs directly from the upload. There is a 50 MB project size limit, though the majority of projects do not reach that file size.

Retrieved from "https://test.scratch-wiki.info/w/index.php?title=Eng:Scratch_2.0_Offline_Editor&oldid=8597"
Cookies help us deliver our services. By using our services, you agree to our use of cookies.
Category: