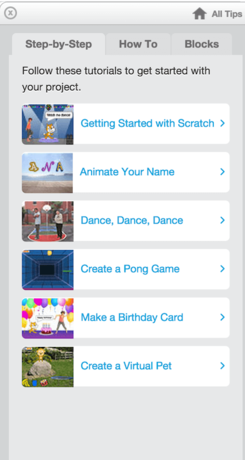 This eng is about the help window. For tips on using Scratch 1.4, see Scratch Secrets.

The tips window is a new form of getting help in Scratch. It is built directly into the editor, a bit like the help dialog of 1.x. It is always visible, even when zoomed in with the browser or when viewing a project in full screen.

It is a full guide through a user's first few experiences with Scratch. It contains a getting started guide, some "how to"s, and a reference on how to use blocks.

The Getting Started section contains a getting started guide, helping the user get acquainted with the Scratch User Interface and make their first project.

It contains a 13-step introduction to creating a simple project, called the Step-by-Step Intro. The steps shown are:

This section has 5 images, each focusing on a different part of the project editor (studio).

This section contains a 28-second long silent video explaining a bit about the new vector paint editor. Specifically, it shows how to group and ungroup shapes, and changes the Scratch Cat to look like it is sitting.[factually inaccurate?]

This section contains three tutorials, focused on the graphic effects.

The first one, titled "Play with effects", is a basic introduction to effects. The second, "Create interactive effects", uses Reporters to change effects. The third, "Interact with a microphone", is not quite about effects, but fits slightly.

This section also contains three tutorials, which teach how to do simple animation.

This section contains three tutorials that tell how to make a story.

The first tutorial, "Talk to each other", tells how a knock-knock joke can be made. The second one, "Glide off the stage", teaches how to make a sprite look as if it is exiting the stage. The final tutorial, "Switch backdrops", shows how the backdrop can be switched to another one.

This section contains a total of five tutorials on how to use music in a project.

The first tutorial, "Play an Instrument", introduces the instrument blocks in Scratch. The second one, "Play background music", explains how one can put background music into a project. The third, "Import your music", teaches how to import music into Scratch. The fourth tutorial, "Record sounds", shows how one can record sounds using a microphone. The final one, "Edit Sounds", introduces Scratch's sound editor.

CartoonNetwork has sponsored a We Bear Bears Project tip that is in the Tips Menu.[citation needed]

There are currently nine (9) projects seperate from the "Getting Started With Scratch" tutorial that are listed under Step By Step. These 9 tutorials have step-by-step instructions showing each script needed to create the project. The tutorials available currently under the Tips Window are Getting Started With Scratch, Animate Your Name, Make Music, Race to the Finish, Dance,Dance Dance, Create a Pong Game, Catch Game, Hide-and-Seek Game, Create a Virtual Pet, and Favorite Things.

This last section contains help on how to use each block. 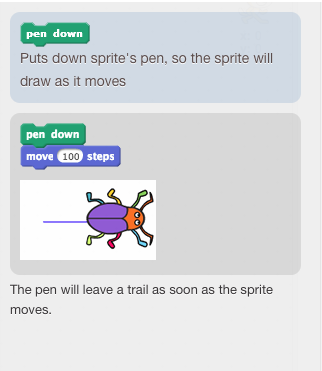 The tip for the

Retrieved from "https://test.scratch-wiki.info/w/index.php?title=Eng:Tips&oldid=19247"
Cookies help us deliver our services. By using our services, you agree to our use of cookies.
Categories:
The Wiki is working on a dark theme, and you're seeing it! Got feedback? Post on the Wiki Forum Topic.