On July 29, 2010, a Pac-Man project by the user 124scratch was taken off of the Scratch Website by request of Namco Bandai Games, the owners of the original Pac-Man game. This generated significant opposition from both the Scratch Team and the users, even spreading to users of other sites.[1] This was the first of two times when the Scratch Team was contacted by another business for an issue, the other being the Animation Hall of Fame. 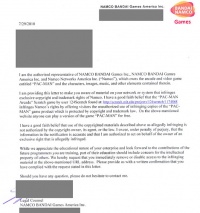 The letter NAMCO BANDAI Games wrote to the Scratch Team for what they called "copyright infringement."

The project was removed from the site by the Scratch Team in accordance with Namco's protests.

Many users were angry about this, and a petition was formed. Over 160 users signed it.[3] Some users sent emails to Namco, asking them to reconsider.[4] Namco never replied to these emails.[citation needed]

The Scratch Team claimed fair use for educational purposes and continues to dislike the removal although they did censor the project.

Some users called Namco "NOMCO" as a result of the project's removal.[6]

Also, it is possible that you can make exact replicas for most games, but any games (such as Minecraft) that cost money, would be illegal and removed (though a Minecraft replica is hard to make)

Some users of Scratch sided with Namco, arguing that Namco had copyrights to the game and it is fair for them to have taken it down.

Some users who also sided with Namco made their own petition, but it got little support.[7]