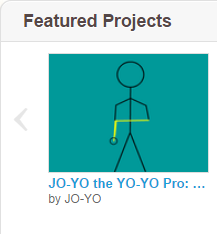 The thumbnail of a project on the Featured Projects row.

A project's thumbnail is the display icon which represents a project on the Scratch website and can provide an attractive appearance for a project. When exploring the website for projects, the image of the project is the thumbnail. Thumbnails also refer to icons used to represent an object of some sort in other situations.

In the Paint Editor, costumes also have thumbnails on the left-hand side to represent them when being selected. All sounds in Scratch have the same thumbnail, that of a speaker and sound physically coming out of it. The thumbnails of all media in Scratch represent the media in a visual way. If a project is being played in the editor and the sprites' costumes are changing, then the thumbnail will always be the current costume.

To add a thumbnail quickly, you can use this script on the thumbnail sprite (be sure that is also at X: 0 and Y: 0 for best results)

Alternatively, you can use this script:

In late 2014, a hack was revealed which allowed users to set animated thumbnails. This then went popular and encouraged many users to try this hack by themselves.[1] A user has even wrote a program that sets animated thumbnails.[2] However, many users protested the hack as it would be flashy and annoying to users.[3] The Scratch Team has declared that all projects with animated thumbnails would be marked NFE to avoid lag on the Front Page.[4] That means that it will not have an opportunity to be front paged, and if by chance it does, a Scratch Team member will remove it. They will rarely appear in the search results. If you wish to have an animated thumbnail on a project, please keep in mind that it cannot be front paged nor likely found through search results, and do not animate it if you wish it to be front paged someday or found using Scratch's search bar.

Currently, there have been glitches where the project thumbnail will only change for certain parts of the website. My Stuff often does not include the updated thumbnails, where as the front page does. However, this may not be consistent among all devices and browsers. After changing a thumbnail, the project make take a while to update to where you can see the thumbnail on the creator's profile page often resulting in a thumbnail with just Scratch Cat on it. In certain cases, the thumbnail image can lead to a broken link.

Retrieved from "https://test.scratch-wiki.info/w/index.php?title=Eng:Thumbnail&oldid=9495"
Cookies help us deliver our services. By using our services, you agree to our use of cookies.
Category: