The Featured Projects section shows twenty projects on the front page, as the row is scrollable. Clicking the See More button shows more.

Some users have suggested that there be a featured users section as well.[1]

Why a Project Gets Featured 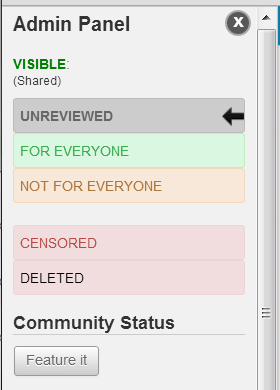 The Scratch Team process of featuring and reviewing a project.

Featured projects are not normally chosen for being an advanced project — rather, what is looked for are projects that are unique and have an interesting touch.

Users are allowed to recommend projects to be featured in a forum thread in the Scratch Forums.

The forum thread lists what the Scratch Team is looking for:

There are restrictions as well; one can not submit a project if it:

The restrictions were changed after a user complained about them.[2]

— A music project which involves making cats meow at different pitches by pressing down keys. Shortly after it was featured, it raised tons of controversy about animal cruelty[4], due to the real concept of the katzenklavier, but later settled down.

A Featured Studio is a studio that has been chosen by one of the Scratch Team members. They are shown in a section on the Front Page that displays the five most recently featured studios.

Unlike other sections on the front page, The Featured Studio section has no time limit. Scratch Team members add a studio whenever they find an interesting one.

On the Clutter site, Clutters were featured. These were chosen entirely by an administrator, not suggested by the community.

Retrieved from "https://test.scratch-wiki.info/w/index.php?title=Eng:Featured_Projects&oldid=6853"
Cookies help us deliver our services. By using our services, you agree to our use of cookies.
Categories: