The Forever 积木 is a 控制类积木 and a 半框形积木. Blocks held inside this block will be in a loop — just like the 重复 () 次 block and the 重复直到 () block, except that the loop never ends (unless the 停止标志 is clicked, the 停止全部 block is activated, or the 停止程式 block is activated within the loop). Due to this infinite loop, the block has no bump at the bottom; having a bump would be pointless, as the blocks below it would never be activated.

This block has a slight delay, so for optimum speed of execution, single frame block stacks should be used. 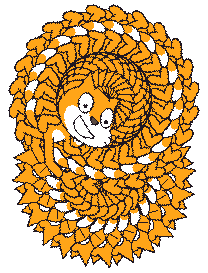 An example of the behavior of a forever loop

The block is one of the most commonly used blocks in Scratch because there are a lot of cases when an infinite loop is needed. Some common uses are:

This block can be replicated in two ways: With a 菱形积木 statement that will never be true, or through 递归.

One method that does not involve false boolean statements is tail recursion. Tail recursion can be created by a script broadcasting the 广播 needed to start it, thus repeatedly running the script:

This has some benefits to making projects. For example, the script is helpful since it can be used to create fractals.

All of these will work in the last workaround.