The Featured Studios section on the Front Page shows studios that the Scratch Team has deemed interesting enough to feature.

Before October of 2015, only four studios were shown. In October of 2015 the Scratch Website was redesigned and the number of featured studios at a time was changed to five. 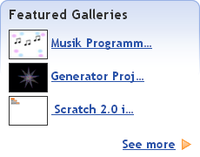 The Featured Galleries sidebar section before 2.0.

The Featured Studios section is the second row from the top.

In the 1.x website, before the release of 2.0, there was an analogous list in the sidebar, called "Featured Galleries". It only showed 3 galleries at a time.

Retrieved from "https://test.scratch-wiki.info/w/index.php?title=Eng:Featured_Studios&oldid=6855"
Cookies help us deliver our services. By using our services, you agree to our use of cookies.
Categories:
The Wiki is working on a dark theme, and you're seeing it! Got feedback? Post on the Wiki Forum Topic.