Activity feeds are a feature in Scratch that shows what users you are following have been doing. There is one on the Front Page, when logged in, called "What's Happening", and on a user's Profile Page, called "What I've been doing", that is available also to guests.

The What's Happening? section on the front page.

The What's Happening? section is viewable on the Front Page to logged in users. It shows what people they follow have been doing.

If the user has not followed anyone yet, a message appears instead that says, "This is where you will see updates from Scratchers you follow - Check out some Scratchers you might like to follow".

What I've been Doing 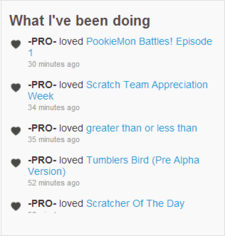 The What I've been doing section on a user's page.

The What I've been doing section is on the right side of a Scratcher's Profile Page, next to the About me and What I'm working on sections. It shows what the user has been doing. The activity in the What I've been doing box disappears at a different rate, depending on how active the user is. For example, the activity of users who commonly love or favorite projects will disappear quite quickly, however for less active users, it could take many months, or even years for activity to disappear.[citation needed]

There is currently a bug where posting in the forums causes all activity in this section to disappear. The cause is still unknown.[1]

The following activity is recorded and shown. In each section, a maximum of 5 recent items is enforced.

Retrieved from "https://test.scratch-wiki.info/w/index.php?title=Eng:Activity_Feeds&oldid=16807"
Cookies help us deliver our services. By using our services, you agree to our use of cookies.
Category:
The Wiki is working on a dark theme, and you're seeing it! Got feedback? Post on the Wiki Forum Topic.