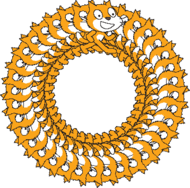 A sprite's direction value controls how much a sprite is rotated. It is measured in degrees (°) and ranges from -90° (pointing left) to 180° (pointing down). The default value for the direction is 90° (pointing right).

Whether the sprite is actually rotated or not is determined by the sprite's rotation style.

Depending on the direction a sprite is pointing in, the Move () Steps block will move the sprite differently. However the Change X by () and Change Y by () blocks are not affected by the direction of a sprite. 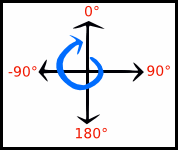 Scratch uses an angle measurement that is similar to degrees, with the addition of negative values, like polar coordinates. "0" represents "up". Every degree added corresponds to a one degree turn clockwise by the sprite. So a direction of 90 means a sprite turns 90 degrees (a quarter turn) after pointing straight up and will thus point right.

Negative degree measures simply mean rotation counter-clockwise rather than clockwise. So -90 is left and -180 is down, just like +180.

This table shows some common values and their directions:

The expression that returns the direction (subtracting the 360 if the number is too large) is this:

The following blocks can be used in conjunction with this value:

— The stage monitor and reporter block of the direction value

— Changes the direction by a certain amount

— Sets the direction of a sprite

— Moves in the current direction

This value can be used in a number of ways:

Retrieved from "https://test.scratch-wiki.info/w/index.php?title=Eng:Direction_(value)&oldid=6686"
Cookies help us deliver our services. By using our services, you agree to our use of cookies.
Category: