The Play Note () for () Beats 积木 is a 音效类积木 and a 条形积木. The block will play the specified note with a set MIDI instrument for the specified amount of beats.

Prior to Scratch 1.2, this block used to be called Play Note () for () Secs, but was changed because the length of a beat can now be changed with the 演奏速度设为 () bpm block.

As the block plays a note, it is widely used when a song is played with the 音效类积木.

Some common uses for the Play Note () for () Beats block:

The Play Note () for () Beats can sometimes be tricky to get used to since the notes and rhythms are notated with numbers, unlike sheet music. These diagrams may help: 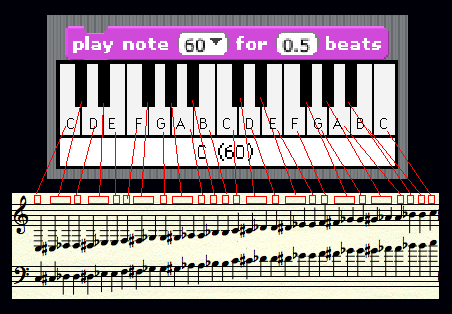 The note names are written on the keys. Notes written in the two most common clefs (Treble clef and Bass clef) are connected to the piano. All notes can be written in an infinite number of ways. The most common enharmonic notes are included. A line going from a long red box means the notes go to the same key on the piano. Even though the drop-down keyboard shows only two octaves of notes (48 to 72), a number can be put in manually to get any note. To change octaves, simply add or subtract 12.